Last week was Boulder Startup Week. There were so many great events… and one that immediately caught my eye was the Battle of the Games Hackfest hosted by QuickLeft. I had made dinner plans so wasn’t planning on being a part of the event, but definitely was excited to check it out.

And then my dinner date had to cancel. Having already made dinner reservations, I invited one of my gSchool instructors Jeff Dean in her stead.

Over dinner, we couldn’t stop talking about the Hackathon and about apps we could feasibly build during the Hackathon. It was too exciting not to try and be a part of that! 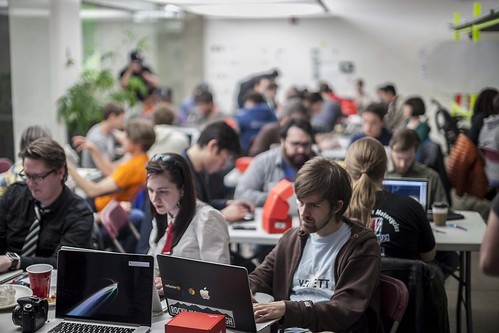 We hurried over to QuickLeft and were delighted to find that we could still join.

We had decided to create one of my favorite games as a kid, Number Stumper from the Texas Instruments toy Speak&Math.

This was my favorite toy as a kid. I remember going on road trips all the time with my parents and sister, and Amber and I would play Number Stumper. This game is a variant of an old codebreaking game called Bulls and Cows that is rumoured to be over 100 years old. Another variant of this game came to market in 1970 as MasterMind and is still in production.

This is the game I began working on before starting gSchool after reading Chris Pine’s Learn to Program, which is even available free online (not updated for Ruby 2.0+). I wasn’t sure that diving into the world of programming would be for me… until I realized that days had passed and I was just deleting code and starting again, and again, and learning and expanding my brain and my code understanding and it felt amazing. After the Hackathon, I dug that old script out of an archived computer and put it in a Gist. Wow, look at that code!

So I applied to gSchool.

For the Battle of the Games Hackathon, Jeff and I decided to divide and conquer, and test drive (almost!) everything out. Knowing that the game algorithm is not super straight-forward, I was a bit wary of not test driving the algorithm. So Jeff set out on the CSS and HTML, and I started writing tests and putting together the algorithm. We definitely put our implementation stories in order of importance and started to hack away. Of course we didn’t do everything we put on our list… if we did, I might question our blue-sky imagination! We did only have 3 hours and some really great ideas for future iterations. But we definitely got a working program put together and even added some bonus items to our program… like an about page and a list of game status and number of guesses on solved and unsolved puzzles. Look how pretty that thing is!

I am so proud and happy of what Jeff and I had made. And then was so excited and proud that we won SECOND PLACE! First place was taken by some of my amazingly talented and super nice classmates at gSchool: Jenny, Martha, Cory, Nate and Paul. All in all it was an amazing night. And the game is still pretty fun to play!

Galvanize even wrote up a blog post about it! So proud to represent gSchool.

Check it out on GitHub!